My Place, Your Place. A mural....local artists interview by Pam Fyfe 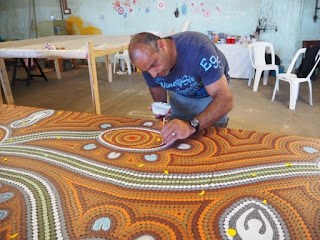 The enLIGHTen Me: I Have a Hall in my Heart mural has been completed at the Old Butter factory, thanks to Anne Sanders generously allowing the space to be used.

It is difficult to think of another space that would have been large enough for the task of creating a 7.5 metre mural. The mural tells the story of Birregurra and its relationship to the Birregurra Mechanics Hall and is part of the EnLightenMe project. The concept was to have a designing artist and have community participation to complete the mural. 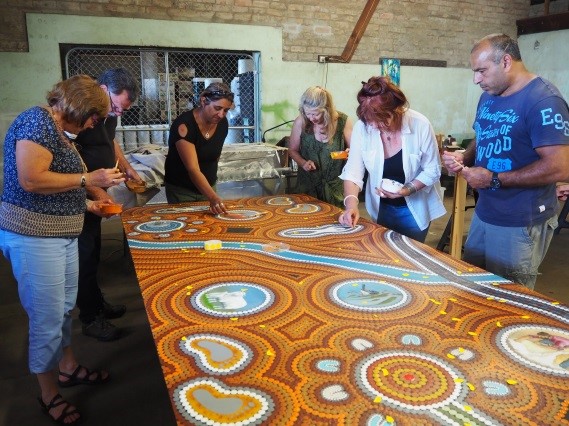 Gunditjmara artist Joey Chatfield, the designing artist, presided over the local community participant’s efforts.  Joey attended meetings with the community to hear the stories of local history of farming families, landmarks, the land uses and local flora and fauna.

Joey then came up with a wonderful design to incorporate as many of these ideas as he could. He ran workshops to assist participants to acquire knowledge about the dreaming, kinship systems, traditional ways of living, painting techniques, the meaning in paintings, symbols and stories.
After the initial meetings with the community the design was created and local artist Natalie Newton was asked to paint some of the circles representing the districts important icons and/or symbols. She agreed and asked two other artists from her painting group to join her.

Natalie Newton
Natalie was good at drawing when she was young and practised regularly. She developed her painting through workshops and classes; she also has been a member of groups where the members enjoy painting alongside others of like mind. Family and work commitments stalled her painting at various times. After she retired she undertook a Diploma of Graphic Arts. 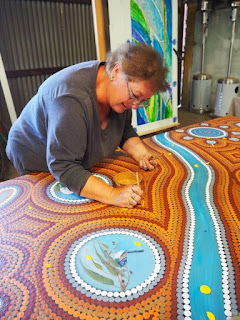 Natalie is known, among other things, for her entries in the Annual Festival Art Show, the Pop-Up Gallery and the amazing cow that graced The Yards last summer. She is a member of the Birregurra Community Arts Group and has spent time on the committee.

Natalie’s paintings on the mural feature cows and the stockyards, sheep, a shearer, a platypus and fruit, representing some of the major influences of the town and the surrounding district.

Natalie was also Joey’s right hand being onsite during the work, understanding the intricacies of the story and the work as well as the importance of the colours and the accuracy of the dots. She also assisted and guided the many volunteers working on the mural. 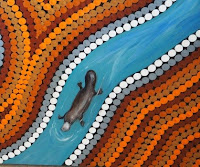 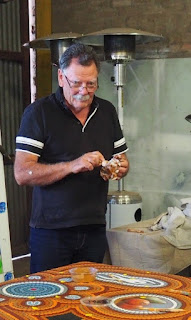 Barry Gill, a member of Natalie’s painting group, has also painted focus circles for the mural. His contribution has been the buildings of the Native Youth/ old Cob and Co building, now the 1865 Bed and Breakfast, and the Anglican Christ Church in Sladen Street. These buildings are both highly significant in the history of the town of Birregurra.

As a child Barry’s mother had encouraged him to draw. While he was still at school a teacher encouraged him to keep up his painting.  He enjoyed painting and so it was not too difficult. Although there were breaks due to work commitments, he continued to paint.

In 70/80’s Barry attended classes and joined a group of painters and has continued to do so. Now living in Birregurra he sought out others who might be interested in setting up a similar group and that was when he found out about the group Natalie had started. He joined. “The sharing aspect of being a member of a group helps to keep you interested in continuing your work,” said Barry. 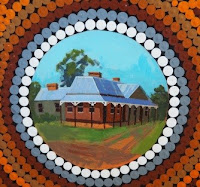 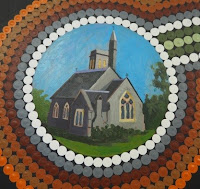 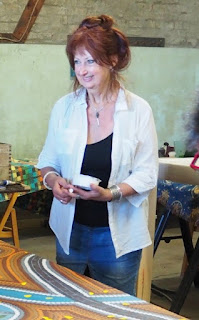 Allison McClaren is the painting group’s member chosen to paint some aspects of the flora and fauna of the district. Her paintings which feature circles of a blue wren and a kookaburra and kangaroo demonstrate her abilities as a wildlife painter. Allison also painted the gypsy wagon.

As a child Allison had a passion for drawing and in fact would draw over everything including walls, tables etc. She is self- taught and her styles and areas of expertise are continually evolving. When her children were young she started painting with oils. Today she prefers acrylics as they dry quicker enabling her to continue her painting at a faster rate.

Allison has, in the past, created caricature dolls using hand painted calico and making all the clothes. These she sold at markets. Later she used polymer clay to create daringly different “little people” caricatures, again exhibiting them and selling them at markets.

Over the last 10-12 years Allison has turned more towards painting. She found out about Natalie’s painting group and joined. She enjoys regularly attending the group and swapping ideas, working alongside others but doing her “own thing”. 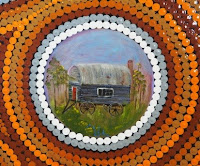 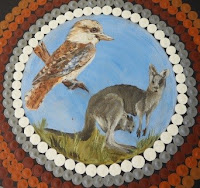 Some of the Dotters
Although many people demonstrated enthusiasm for the project, numbers were reduced. Regular days of Wednesday and Sunday made it difficult for some people to attend and to develop the skills necessary for the dotting.

There were still some restorative touch-ups and then the graffiti proof final coats were applied. There “dotters” were then able to place their handprints on the reverse side of the mural.  The final placing of the work of art will be in the area next to the hall.

For more info about the mural and the enLIGHTen Me project, head to www.enlightenmebirre.com 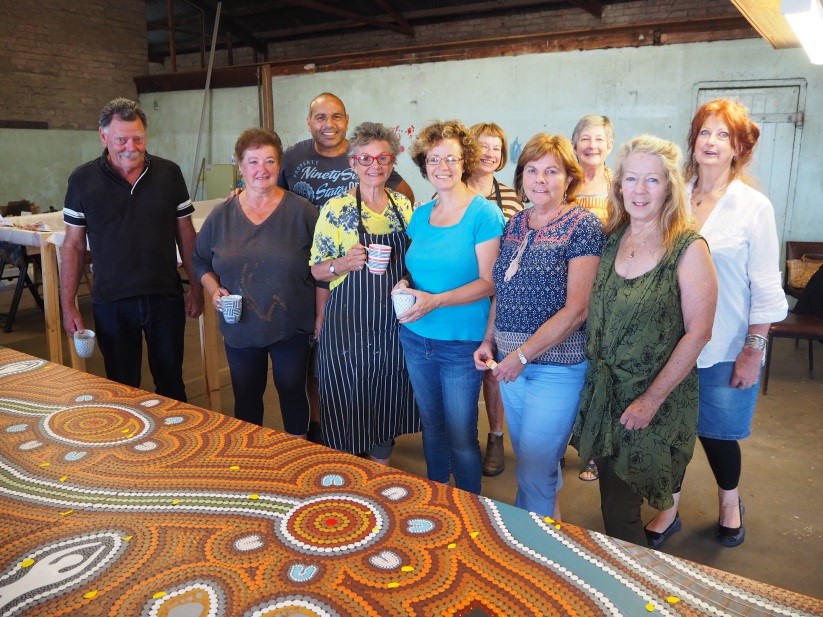 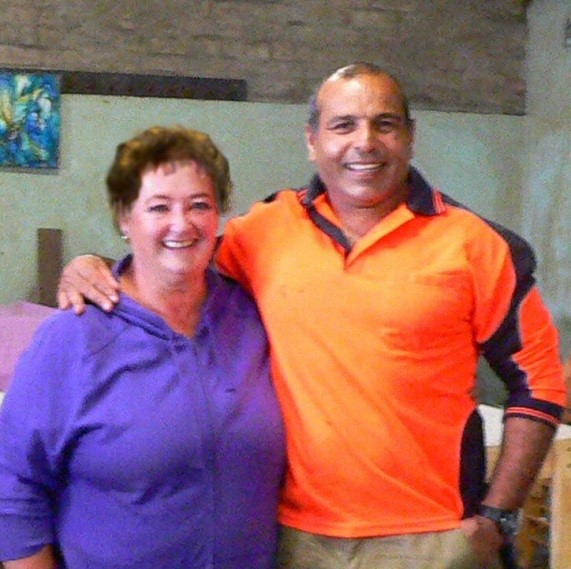 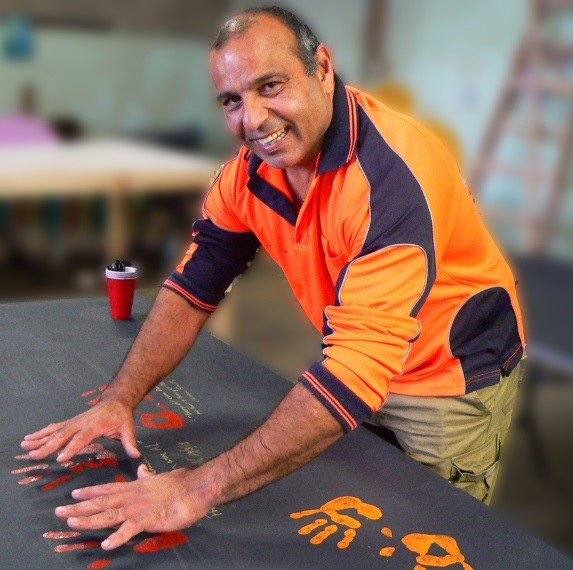